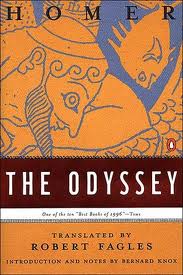 Odysseus continues his story to the Phaeacians: The men's next stop was the Aeolian island, home to the god of the winds. They stayed with Aeolus for a month, and his parting gift to Odysseus was a sack holding the winds. Aeolus freed the West Wind to blow Odysseus's ship toward home, the men sailed for nine days, and on the tenth they caught sight of Ithaca's shores. Just then, Odysseus fell asleep from exhaustion. His crew became suspicious that the tied up bag Odysseus had gotten from Aeolus contained a great treasure he wasn't sharing, so they untied it to see what was inside and in doing so freed the winds. Odysseus woke and watched in despair as the winds blew them back out to sea and then to Aeolus's island.

Odysseus begged Aeolus for help, but Aeolus believed that Odysseus's misfortune proved that he was hated by the gods, and turned him away. There was no wind to help them, so the men had to row; after seven days, they reached the island of theLaestrygonians. Odysseus sent a few men to investigate – were the inhabitants civilized people or monsters? They met a princess at a well, and she sent them inside her father's palace. They saw an enormous queen, who called over her husbandAntiphates; he walked in and ate one of Odysseus's men, but the other two fled. The Laestrygonians ate most of Odysseus's crew, but one ship escaped.


Odysseus and his single ship sailed on, and anchored on Circe's island. They rested for two days, andOdysseus went out and killed a deer to feed his men. They feasted and slept. The next morning, Odysseus told the men that he saw smoke rising somewhere in the middle of the island, and the men cried out in fear of the inhabitants of the island. Odysseus responded that crying does them no good, and sends half his men to investigate. When the men came to Circe's palace, they heard her singing as she weaved. They called out to her and walked in – all butEurylochus. She welcomed them to her table, but she mixed a potion into their food that erased their memories of home and turned them into pigs.

Eurylochus ran back to the ship and told Odysseusthat the men vanished into the palace and did not return. Odysseus set off for the palace, but before he reached its doors he met Hermes, who was disguised as a young man. The god gave him a drug called moly that would make him immune to Circe'spotion. When Circe touches you with her wand, the god advised, run at her with your sword until she backs away in fear and invites you to her bed. The god told Odysseus to accept the goddess's offer, but only after she swore a binding oath not to hurt him.


When Odysseus walked into Circe's palace, everything happened just as Hermes predicted, and Circe then guessed that the stranger must be Odysseus. When they retired to bed, Circe's maids prepared a bath and a feast. But Odysseus was too troubled to eat, so Circe transformed his crew from swine to men again. Odysseus returned to his ship to hide his cargo in caves and to call the rest of his crew back to the palace. Eurylochus urged the men to depart right then, instead of rushing into a situation that might be a trap; he reminded them of the men that died in Polyphemus's cave because of Odysseus's poor judgment. But the men followed Odysseus, Eurylochus included.

The men stayed on the island for a year, living in luxury, but after a year the crew grew increasingly restless and finally convinced Odysseus that it was time to leave. Circe advised him to go down to the land of the dead to speak to the ghost of Tiresias, a blind prophet.


Circe told him to find the spot where the River of Fire and the River of Tears meet, to dig a trench there, to pour milk and honey, wine, and water for the dead, to sprinkle barley; finally, she said, he must promise the dead to kill a heifer when he returned to of Ithaca and to slaughter a black ram for Tiresias. Afterwards, Odysseus must slaughter a ram and an ewe with his head turned away. Only then will the shades emerge. At that moment, Odysseus's crew must burn the corpses while Odysseus keeps the shades away from blood; then Tiresias will appear and advise him how to complete his journey home.


As Odysseus and his crew woke the next morning to depart, they discovered that Elpenor, the youngest member of the crew, had gotten drunk the night before, slept on the roof, and when he woke in the morning at the sound of the other men working he fell off the roof and broke his neck. Odysseus explained their coming journey to the underworld, and the men were disappointed to learn how complicated the trip will be.