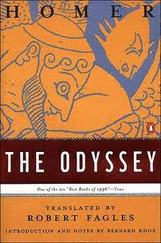 The next day, King Alcinous stows Odysseus's many gifts on the ship and everyone feasts. When Odysseus walks onto the ship the next morning, he falls into a deep, sweet sleep – a sleep that resembles death, and that erases briefly the memory of his twenty years away from home. The ship lands in a harbor in Ithaca and the crew places the sleeping Odysseus and his gifts in a spot far away from any road to hide him from thieves.

Poseidon is angered that the Phaeacians helpedOdysseus and gave him so much treasure, despite Poseidon's grudge. Zeus considers Poseidon's complaint a bit trivial, but he encourages him to take whatever action will soothe his anger. To take revenge, Poseidon fulfills a prophecy mentioned in book 8: he turns to stone the Phaeacian ship that carried Odysseus to Ithaca just as it returns to the Phaeacian harbor, so that the ship sinks. The Phaeacians are terrified that he will also create a mountain around their harbor and block their access to the sea, as the prophecy says, so they pray and sacrifice to him to try to appease him.

Back in Ithaca, Odysseus wakes from his long sleep.Athena has surrounded him with mist to protect him, so at first he doesn't recognize his surroundings. He thinks that the Phaeacians tricked him and brought him to some foreign land. Then Athena appears in the guise of a young shepherd, and tells Odysseus that he is in Ithaca, after all. Odysseus conceals his joy and tells Athena (who he doesn't recognize) that he's a fugitive from Crete, wanted for killing a man who tried to steal from him. He says that the Phaeacians took pity on him and brought him to Ithaca while he slept. Now Athena changes into a woman, praises Odysseus for his cunning, and reveals her real identity. She explains that she will help Odysseus hide his treasure and conceal his identity, and warns him that he must suffer further even under his own roof.

Odysseus notes that Athena had been kind to him during the war but that she seemed to have abandoned him during his long travels. Athena delights in his grace and cunning: these qualities, she says, are the reason she can't help but stick by him. She explains that she had not helped him during his travels for fear of inciting Poseidon's anger. She tells Odysseus about the suitors' treachery and aboutPenelope's loyalty. Odysseus realizes he might have died Agamemnon's ignoble death had Athena not warned him, and asks her to help him plan his revenge. She changes Odysseus into an old beggar and tells him to visit his old swineherd, Eumaeus, who remains loyal to him.
Summary & Analysis Source: http://www.litcharts.com/lit/the-odyssey
Comment Box is loading comments...