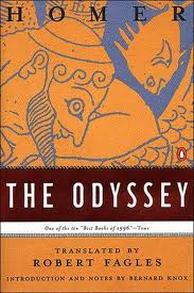 Odysseus names himself and begins telling the story of his long travels after leaving Troy. In the beginning of the journey, he and his men sacked the city of the Cicones and carried away many spoils; Odysseus wanted to leave, but his men decided to stay and plunder and feast. Meanwhile the Cicones called their neighbors for backup, and the expanded army killed many Achaeans before the rest escaped. Zeus sent down a hurricane, the men rested for two days, and then a North wind sent the ships in the wrong direction.

After nine days, the ships reached the land of the Lotus Eaters. There, the crewmen that ate the fruit of lotus lost all desire to return and all memory of home – they only wanted to stay and eat lotus. But Odysseus forced them to return to the ships, tied them to the masts, and told the remaining men to set sail.

Next they came to the land of the Cyclops. The one-eyed Cyclops have no laws, no councils, no farms, no ships or traders. Odysseus and the crew from his ship went to explore the continent while the other men waited on a nearby island. When the men reached the shore, they saw a large cave with flocks of sheep and goats in the yard: the home of a giant. Odysseus left most of his crew on shore and went with twelve men to the cave, taking along a container of very strong wine. The giant was not at home, and the crew looked at his flocks, his cheeses, and his buckets for milking. The men wanted to take what they could and run back to the ships, but Odysseus insisted that they stay to receive the giant's gifts (thought now, he tells the Phaeacians, he regrets his stubbornness).

In the evening the Cyclops came home, closed the entrance to the cave with a giant rock, milked his sheep and goats, and lit a fire. Suddenly he noticed the men and asked them angrily who they were. Odysseus responded that they were Achaeans that had lost their way home, and urged the Cyclops, whose name was Polyphemus, to obey custom, respect the rules of the gods, and receive them generously. Polyphemus scoffed at Odysseus's warnings and said that his kind doesn't fear Zeus or any other god. He promptly bashed two men dead against the ground and ate them gruesomely. Odysseus wanted to kill Polyphemus there and then, but realized that if he killed Polyphemus he and his men would have no way out of the cave, since only the giant could roll back the huge rock blocking the entrance. So they lay there all night in the cave in terror.

At dawn Polyphemus lit the fire, milked his sheep, and ate two more men for breakfast. He then left for the day, shutting the entrance of the cave behind him with the huge rock. Meanwhile Odysseus plotted revenge. He took Polyphemus' club and his men filed it down to a point and singed it at the end. At dusk Polyphemus returned, milked his sheep and goats, and ate two more men for dinner. Odysseus offered Polyphemus his strong wine, and Polyphemus drank three bowls. As the giant became drunk, Odysseus mentioned that his own name was Nobody. In thanks for the wine, Polyphemus promised to eat him last and fell asleep, vomiting human flesh. Seeing their chance, Odysseus and four other men heated up the sharpened club and used it to gouge out the Cyclops' eye. Polyphemus screamed in agony, and other Cyclops rushed up to his cave and asked who was hurting him. The Cyclops yelled ‘Nobody,' so they walked away. Odysseus was delighted that his trick succeeded.

Next, Odysseus plotted their escape. He arranged the rams in the cave in groups of three and lashed a man to the belly of each middle ram; he lashed himself to the belly of the remaining old ram. At dawn, when Polyphemus let the rams out of the cave, the men escaped too. Once outside the cave, Odysseus untied himself and his men and they all hurried to the ships. When they were out on the water, Odysseus yelled back to Polyphemus that Zeus has punished him for his crimes. In response, the furious Polyphemus broke off the top of a cliff and threw it in the direction of the ship, so that a wave drove the ship back to shore. Once they were at a safe distance again, Odysseus yelled back again to say that it was he, Odysseus, that blinded the Cyclops, if anyone should ask.

Polyphemus remembered that a prophet once told him that he would be blinded by someone named Odysseus and called out to his father Poseidon to exact revenge: he prayed that Odysseus should never reach home, or that he should reach home alone and after great suffering. The Cyclops threw another rock, and the resulting wave threw the ship back to the island where the rest of the crew sat waiting. Odysseus divided up the stolen sheep, but he slaughtered the old ram in Zeus's honor. However, the sacrifice did not appease the god. The men slept and departed at dawn.
Summary & Analysis Source: http://www.litcharts.com/lit/the-odyssey
Comment Box is loading comments...