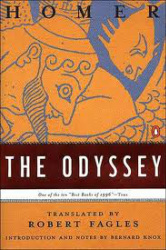 A rude beggar named Arnaeus (Irus for short) wanders into the palace. He insults Odysseus-the-beggar when they meet on the grounds, and Antinous decides to pit them against each other so that the suitors can enjoy the fight; the prize is sausage and a seat at the suitors' table. Odysseus-the-beggar pulls up his rags to reveal a powerful-looking body, and Irus is filled with fear. Odysseus decides to hurt him only slightly; he punches Irus on the neck and flings him outside. The suitors laugh and invite the stranger to eat at their table.

The suitor Amphinomus is especially kind to Odysseus-the-beggar. As they talk, Odysseus mentions his own past violence and error, advises him to live lawfully, and hints at the suitors' impending deaths. Amphinomus feels very ill at ease, but the narrator notes that there is nothing to be done – he is fated to die on Telemachus's spear.

Athena inspires Penelope to come down and speak to the suitors. The queen tells the suitors that if they hope to win her hand they should give her gifts, as is customary. Odysseus is pleased at this clever trick. The suitors send their servants to bring fine treasures and begin to dance and sing.

Athena wants to rile Odysseus as much as possible, so she inspires Eurymachus to mock him once more, but Odysseus remains calm and predicts the suitors' deaths. Eurymachus throws a stool at Odysseus-the-beggar but the stool hits a servant instead. Telemachus scolds the suitors and sends them all to bed.
Comment Box is loading comments...