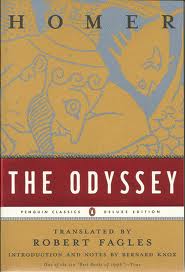 Penelope sets out Odysseus's bow and axes, and announces to the suitors that the archer that can shoot an arrow cleanly through the axes will have her hand in marriage.Telemachus tries it first, to set an example, but he can't even string the bow. The suitor Leodes tries the bow and fails: it is too stiff to bend. Other suitors lack the strength to string it as well. Meanwhile, Odysseus speaks to Eumaeus and the cowherd, Philoetius, outside the palace: he tells them his true identity, shows them his scar as proof, and enlists them in the coming battle. He asks Eumaeus to carry him the bow after the suitors have tried it, and to tell the maids to lock their doors; he asksPhiloetius to lock the courtyard so that no men can escape.

Odysseus reenters the palace, where Eurymachus has just failed to string the bow.Odysseus-the-beggar advises the suitors to rest and pray to the archer god while he himself tries the bow, just to amuse them.Antinous warns him angrily that he may end up like the drunken Centaur Eurythion, who was mauled by his hosts the Lapiths. ButPenelope urges the suitors to let the stranger try his luck; there is no shame in such a thing, she says, compared to the shame the suitors have brought on the household. Telemachusasserts his right to be the one to hand over the bow and sends Penelope to her quarters.

Eumaeus carries the bow to the king amidst the mocking of the suitors. Odysseus strings the bow as gracefully as a bard tuning his lyre; Zeus sends down a bolt of lightning. Then the king shoots the arrow cleanly through the row of axes. He says to Telemachus: it's time for the song and dance that follow a feast.